We don’t have a “Robin Hood” but we do have the Merrymen. Of Barbados.

From from Folklore to Ballads to Calypso or Soca, the Merrymen of Barbados are unbeatable as Barbadian icons. They have inspired and spawned other musicians and bands as they travelled their creative life-path, and up to today are continuing to be a blessing in our music industry.

They have so many songs that it is hard to choose a favourite, and most of their music has a timely element that makes it ‘timeless’ in our minds. Wonderful musicianship, good voices, goodlooking lads, lovely rhythms with an easy tempo….and smiley tunes like Steel Donkey…

“Barbadian folklore at its best, in true Calypso style. The Merrymen’s “Steel Donkey” tells a tale of the mythical creature which was thought to haunt certain parts of the island,…” – Bajanbloom Bloom, on You Tube.

The Merrymen have been making music for over 50 years now. Their work is their legacy, tracing the development of Barbados, highlighting both cultural and social mores nuances and experience. Their music is fun and happy. Like them, merry.

Take this one for instance, inspired by the Bajans love of the TV show Dark Shadows. In the lyrics the girlfriend always so busy watching the show, that she has no time for her man. Everything is about Barnabas, the “duppy” (aka a vampire,zombie, ghost) on the show, so one night, like a true Bajan, her man hides behind her TV and…..whack! He gives the “duppy” one lash with a pistle (bull pistle) and as the lyrics say “didn’t know a Duppy could run so fast”.

The Merrymen of Barbados began back in the early sixties led by Emile Straker, and have travelled and toured taking their brand of fun and merriment, and Barbados, with them. In doing so they have become legends in their own time.

Originally four, they later became a five-piece band breaking venue attendance records in major cities as well as at home in Barbados.

It is songs like these that ensured their popularity and eventual fame. It is the guys themselves, the merrymen, who won our hearts and respect and our love. They are always referred to as ambassadors for Barbados, and back then as youngsters it must have taken strength in each one of them to hold the smiles and carry on with a genre and an island not well known, rather than decamp and play “white”. They stuck to their roots, in whatever way, and their roots were in little Barbados. Five guys took our island and put it on the map.

They sing of everyday things, of women, of men, of just about everything Barbadian; and they sing their tales and songs to the melodies of the island – the dialect, the sea, the winds – with never a negative note.

As our Independence celebration and another Christmas draws closer I leave you with these:

To learn more about The Merrymen of Barbados, and why we love them, visit their Facebook page where you will see old and current photos, learn about their first LP released in the early 1960’s, and get to see very new videos featuring Sir Emile Straker and the band. Unfortunately they are now back to four merrymen as one of them passed on, but they are still perfoming to the delight of their fans. And me. 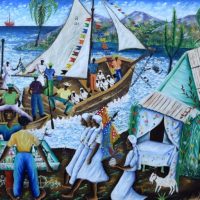 My Photographs are My Own

This work is licensed under a Creative Commons Attribution-NonCommercial-NoDerivs 3.0 Unported License.

News and commentary on Caribbean culture, literature, and the arts

Finding Our Voice in Jesus